My best friend and roommate, River, needs to get something off his chest, literally. He is trans and wants his breasts removed for both reasons of gender dysphoria and back trouble. He started a GoFundMe so that people can help by donating and sharing while he saves up and works on getting a mastectomy. 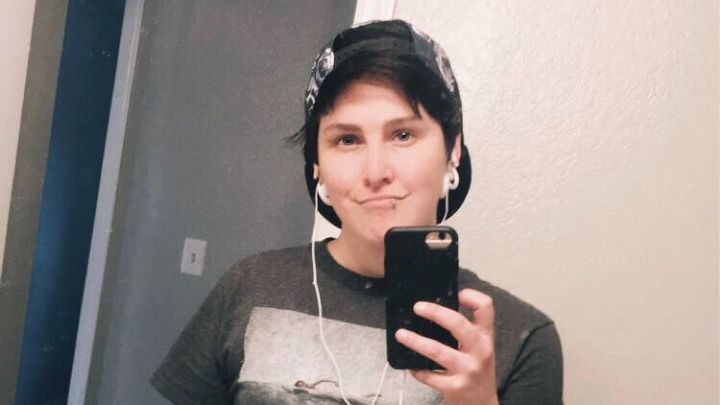 There was life in the dust, and the dust took infinite forms. Most of them never met each other but some of them did. Nobody knows where the dust came from. It always was, and there was no limit to the dust nor the space in which it traveled. There was an endless source of life and living things lived in different environments. Some lived in the heat, some in the cold. Each adapted to the environment it found itself in and some even mistakenly believed that the environment had be created for them, but the reality was that there was no separation from which was alive and which was not. Even when something appeared to die, it was an illusion. Things were broken sometimes but they always found a way of coming back together. Everything was connected.

But there came a time when these lifeforms became aware enough to sense themselves and each other. They saw the shape or the color of a particular form of dust and assumed that the form it took was identical to the life force itself. But life was the magnet that connected the dust and all of the elements. Life was much like water. It was fluid and could take on any shape it needed to.

Over time certain larger forms evolved. These were called plants, and animals. They were different in what they did but they were part of a system. New forms came about while old ones disappeared.

There were many collections of materials in the infinite space. There were stars and planets. There were some planets full of life that did not experience much happiness. They fought and killed each other over who and what they were and which of them was the most important.

But there were some planets where the animals experienced peace. They played and communicated in their own ways and everyone was happy. One of these planets would be called Animal Sanctuary if it was translated into the English language of planet earth.

Part of the reason Animal Sanctuary remained peaceful is because it was ruled by a force stronger than gravity that held things together. This was the Truth. Animals on this planet were incapable of lying. They always spoke the truth because there was never any reason to lie. They had everything they needed and the didn’t really speak the same languages anyway. Most of the time they didn’t know what each other were talking about but they didn’t care because they had no fear. They appreciated the differences they had with others rather than competing.

These animals did not always stay in one form either. They were like water or sand and could be whatever shape they preferred on a different day. So they didn’t really know who was who anymore. There wasn’t much of an idea of species and there certainly was no male or female either. They didn’t have sex or reproduce. They never were born and they never died. They came and went from planet to planet as they pleased. They were truly free in any sense of the word you can imagine.

Some of you who follow my Facebook posts lately may notice that I have not been posting my usual content. Aside from resharing an occasional Vegan or Pro-life post from a friend, I have given up on Facebook as a means for communicating anything important. Almost anything that actually matters will be censored or fact-checked until no truth is left.

I may not know much about this complicated world but this I do know. I value truth and this is not because I want hateful or false information shared, but because each person has their own opinion over which things are considered hateful or which things are true. The Golden Rule demands that I don’t censor others because I don’t like it when it is done to me. Trying to control which truth people see means that people may never know what is actually true. When you believe that the truth is on your side, you will not fear people saying the opposite.
There are also many times when I thought I knew what was true, yet I had only heard one side of the story. There are as many sides as there are life forms to observe them. Knowing the absolute truth is not easy because it’s complicated and is not handed down to you in one easy package.

For years I have called myself Pro-Life. This is still true. I am a Vegan for the animals as well as for humans and do not approve of any violence. But even this is second to truth. It is possible to kill someone and take their life. But there are those who devote their life to the truth, even at the cost of their life. These are the bearers of light which Honesty the Unicorn told me about. Many have died and yet there will always be more. For life has no beginning nor end nor does the truth. Once someone dies, they can no longer be threatened with the loss of their life nor can they be made to lie to save their life.

May the light of truth shine upon your tears. And may the Horse be with you!

I totally only bought Saga Frontier because it has Princess White Rose in it. It doesn’t even matter if I finish the game because this screenshot was so worth it.

Those of you who have followed my blog probably can understand why. The white rose has so much symbolic meaning to me and became part of my name, Chastity White Rose.

Chandler’s Honesty Part 5: The Light of Truth is available now!