There are infinite ways to create a checkerboard and I do so both with my programming as well as in games like Minecraft.

Here is my gigantic 32x32x32 checkerboard in Minecraft made with heavy use of commands. It would be possible to build it in survival mode as well although it will take me much longer. 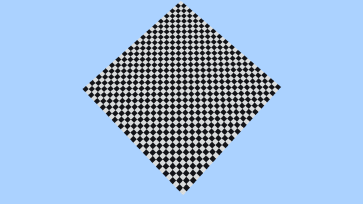 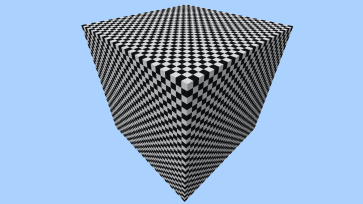 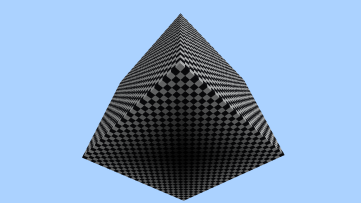 I also continue my Binary Bit Map project as I find time. Here a few samples I’ve posted previously on this blog of what I can do.

Tonight I found a genius way to do star polygons by drawing several smaller triangles to a temporary image, using the scan fill function, and then bitwise ORing them to the destination image. This gives me the filled in pentagrams and hexagrams exactly the same as they would look when I create them in inkscape but also allows for the gif animations I uploaded to my social media tonight. Here is what happens when I draw a single pentagram and then XOR it with a checkerboard background.

And I also have a video I uploaded to YouTube as well showing the same process for ordinary regular polygons.

The infinite beauty of black and white comes not just from how it looks but also how easy it is to make and the efficient compression of images and video when there are only two possible colors. My year’s worth of work on my Binary Bitmap project has enabled me to no longer rely on external C libraries written by other people but instead  draw anything I like as long as I take the time to code the exact coordinates of the polygons.

I am Chastity White Rose, lover of all unicorns and ponies and artist of pixels and polygons. Fabulous secret powers were revealed to me the day I put on my checkerboard dress and said: “By the power of grayscale! I have the power!” And I became She Man, the most powerful transwoman in the universe! And I came to understand who I am. I am a programmer who can draw pixels to bitmaps of both black and white. And a Vegan, who protects the innocent! But within me lies a mortal heart, which suffers from depression. Will I have the strength to resist? Or will it be my doom. View all posts by Chastity White Rose

One thought on “Still making checkerboards”